Heber Springs will begin its 100th season of football against one of its oldest rivals.

The Panthers will host two-time defending Class 3A champion Harding Academy at 7 p.m. Friday in the delayed season opener at Panther Stadium.
Newport canceled last week’s scheduled opening game to Heber Springs because of Covid-19 reasons. Nonconference games not played for Covid reasons are counted as non-contests, while conference games will be counted as forfeit wins or losses.

“It was disappointing when we learned that Newport would be unable to play us, but the players quickly turned their attention to Harding Academy,” Panther coach Todd Wood said. “The extra time gave us an opportunity to let players gain experience at playing different positions, which will help us when starting conference play.”

Harding Academy had major graduation losses on offense, but the Wildcats have been productive through two games.

Junior quarterback Kade Smith, who started at safety during most of last season, leads the offense. Smith has completed 32-of-42 passes for 477 yards and three touchdowns with two interceptions.

Andrew Miller is the leading rusher for the Wildcats with 23 carries for 96 yards and three touchdowns. Jackson Fox is Smith’s favorite receiver with 11 catches for 241 yards and one touchdown.

“Harding reloads, not rebuilds,” Wood said. “The new guys have not miss a beat. They still play with a lot of discipline and also are very aggressive. Harding will have an advantage with two games under its belt.”

Linebacker Levi Mercer and end Eli Wallis lead the Harding Academy defense with 11 tackles each. The Wildcats, who have allowed 39 points in two games, return nine of 11 starters.

“We know most of Harding’s experience returns was on defense,” Wood said. “But offensively, they have not missed a beat.”

Wood feels more comfortable about his team with an offseason of weight room work, spring practice and summer workouts.

“We are farther ahead than at this time last year,” Wood said. “We understand our roles, plays and assignments better.”

The Panthers will start an all-sophomore backfield with quarterback Xander Lindley and running back Parker Brown. Lindley was a starting receiver for last season’s successful junior high school team, though he did play some at quarterback as an eighth-grader, and Brown started at running back. Gideon Tate, another sophomore, and senior Jackson West also will see action in the backfield.

Two starters return on the offensive line — left guard Peyton Owens and left tackle Thad Bray. Tristan Thissen will start at right guard and Corbin Jones at right tackle. Sophomore Joenah Cordell was named the starting center in the place of Zach Thomas, who is sidelined because of illness for at least two more weeks.

Gus Hannah and Easton Cusick lead an experience receiving corp. Dalton Yancey, another sophomore, Austin Winchester and Chris Edwards will be among other players to watch in the passing game.

“Lindley developed with a strong arm during the summer,” Wood said. “He continues to learn how the offense works. We needed a quarterback with mobility and who can make plays downfield when the pocket breaks down. Bray and Owens are solid players on the line. The players have worked hard and ready for the season to start.”

On defense, Lucas Langster and Jones will start at the ends with Blaze Emerson at nose guard. Chris Benton, who was expected to start on the defensive line, is sidelined indefinitely with a hand injury.

Kenan Sneed, the leading tackler for the Panthers last season, leads the linebacking corps. Thissen will start at the other inside linebacker. Chris Roberts, Hayden Johnson, Hayden Davis and Tate will split time at the two outside linebackers.

Edwards will start at cornerback with Zane Lozeau and Zack Parker splitting time at the other cornerback. Gage Buford and Colton Turley are the starters at the safeties.

Wood said the team is ready, and he expects a good performance.

“We need to  get the season going and learn our weaknesses,” he said. “It will help in preparing for the conference season. One of our downfalls last year was quick turnovers. We must execute and move the ball to stay in games.”

Heber Springs coach Todd Wood and his staff hopes to learn answers after the Panthers tangle in a benefit football scrimmage at Beebe on Tuesday.
Action will start at 6 p.m. with the teams participating in sets of plays on offense and defense. The scrimmage will conclude with the two teams playing for two quarters.

Wood, who was 2-9 in his first year as head coach, and the staff is optimistic that the team will enjoy success during the 2021 season.

“One of the big changes has been a spring camp and summer workouts going into fall practice,” Wood said when asked about the team’s progress. “We are more advanced at this point than last year. .”

Wood said the addition of one coach to the staff helps to spread teaching responsibility among coaches with players at all positions. Ryan Bridges, who previously coached at White Hall, is working primarily with the defensive line. He also is the school’s new baseball coach.

One of the big questions on offense going into the season is determining a starting quarterback. Wood said senior John McBroome, who started two games last season, and sophomore Xander Lindley have emerged as the top two candidates. Wood hopes for a starter to emerge from the scrimmage.

“John has a little more experience with the offense,” Wood said. “Xander was a receiver on last year’s successful junior high team, but he has prior quarterbacking experience. Xander has a good arm and a lot of speed. We plan to give them equal reps at Tuesday’s scrimmage. We also will take at look at Wyatt Winchester.”

Jackson West and sophomore Parker Brown are battling for the starting role at running back. West and Brown also are in the plans at receiver.

The receiving corps may be the most experience group of players. With a year in the system, Wood believes they will have a bigger impact this season

“Gus Hannah is one of our fastest players on the team and runs excellent routes,” Wood said. “Easton Cusick gained speed and size during the offseason. Dalton Yancey played well for the junior high team last year. Austin Winchester can play a role and will get playing time. Chris Edwards may play at receiver and also start at cornerback. We need to figure out how to use all of the players.”

Wood said Lucas Langster, who will start at defensive end, is the backup behind Owens. Blaze Emerson is the likely backup at right guard.

“Thad is our anchor on the line,” Wood said. “Zach can make the calls for the line. We are thin in numbers on the line, but we have players to fill all positions.”

Wood expects the defense will be improved and trying to limit the number of players playing both ways.

“We are looking for effort from the defense,” said Wood when asked about objectives of Tuesday’s scrimmage. “We want to play more physical than last year and tackle well.”

Langster and Jones will play the ends on defense with Emerson at nose guard. Owens and Joenah Cordell will provide depth.

Kenan Sneed, the leading tackler for the Panthers last season, leads the linebacking corps. Thissen is the likely starter at the other inside linebacker with Thomas also expected to play. Chris Roberts, Hayden Johnson, Hayden Davis and Tate rotating at the outside linebackers.

Except for Edwards, the secondary lacks varsity experience, but Wood is confident of the players to play well.

Zane Lozeau, a transfer from Dover, and Zack Parker are battling for the starting job at the cornerback opposite Edwards. Chandler Webber will also play at cornerback. Gage Buford and Colton Turley are the likely starters at the safeties.

“Edwards is one of the strongest players on the team,” Wood said. “We have the players and just need to put them in the right spots.”

After Tuesday’s scrimmage, the Panthers will have a three-week wait until the season opener at Newport on Sept. 3.

“The best thing about the time from the scrimmage to the season opener is the team can make the necessary adjustments,” Wood said. “We will not show everything against Beebe during the scrimmage.” 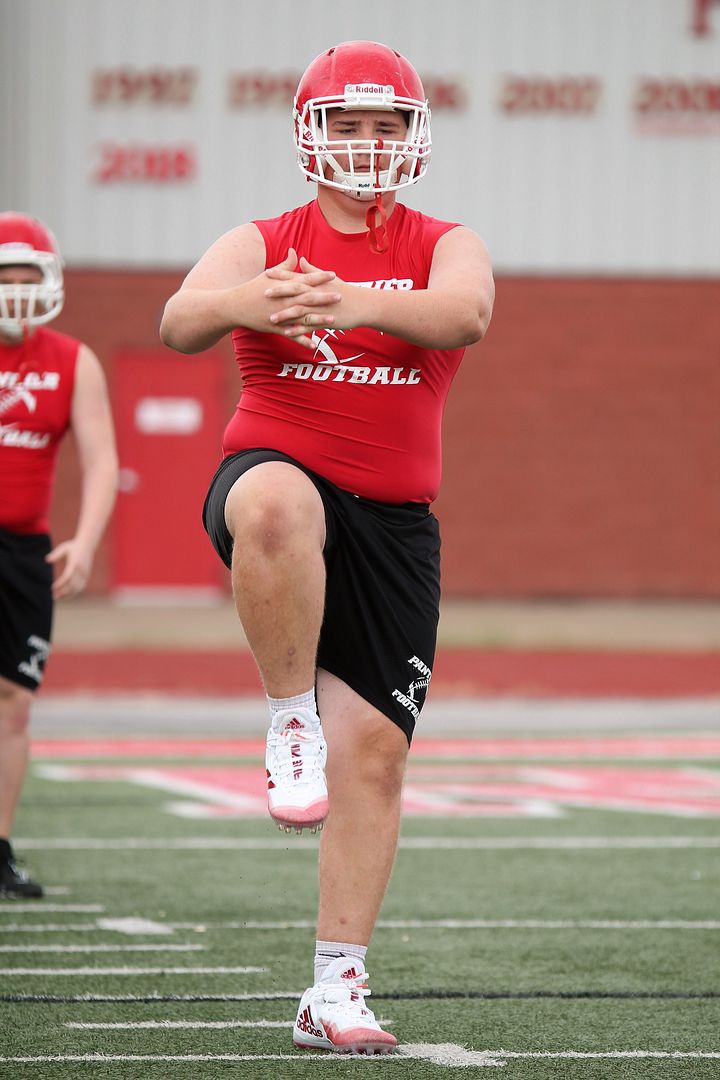