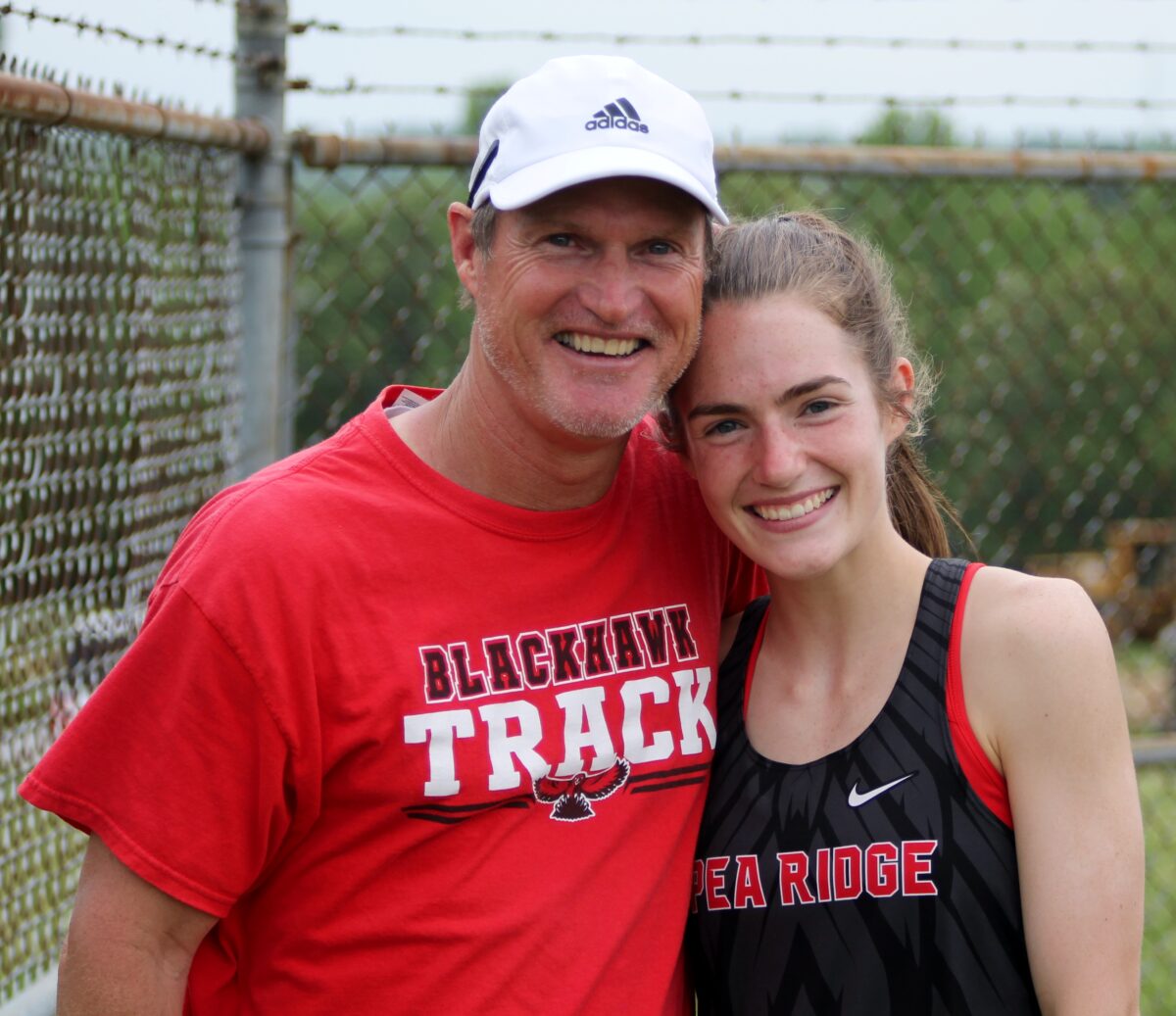 BATESVILLE – There has to be something about Pioneer Stadium at Batesville High School for the Mooneyhan family.

In 1987, then Heber Springs junior Walter Mooneyhan set a then personal best when he cleared 15-6 in the pole vault at the Pioneer Relays. Mooneyhan would go on to break the AA and state overall pole vault record a few weeks later at the AA state meet at Beebe when he cleared 15-4 and half inches. He bettered Heber Springs’ Mark Rezanka’s AA state record of 14-9 set in 1983 and Fort Smith Northside’s Greg Pickett’s overall mark of 15-4 set in 1975.

Flash forward to Tuesday at the 4A state track meet at Pioneer Stadium, Walter’s daughter, Pea Ridge junior Cassidy Mooneyhan, cleared 12-7 which is a new personal best but more importantly also set the new standard in 4A shattering the old mark of 11-6 set by Mena’s Staci Yahn in 2006.

She missed out on clearing 13-feet on three attempts.

“I have wanted to jump 13-feet since seventh-grade,” Cassidy said and though she didn’t get that height on Tuesday she was still elated to get the state record. “It think it’s so awesome.

“It’s something I’ve worked so long for and especially to get it my junior year instead of senior year really surprised me … that means a lot to me.”

The record also meant a lot to her vaulting coach, her father.

“I’ve been inside the ropes with her since she started in the seventh grade,” Walter said. “I have got to watch her progress all the way through. She’s incredibly coachable, incredibly aggressive, and incredibly competitive. On top of that she is a nice person. So that combination makes me incredibly proud.”

Walter, who works at the home office of Wal-Mart in Bentonville, has been a volunteer coach for the Pea Ridge track program since his daughter took an interest in the sport.

“I went through the registered volunteer program through the AAA (Arkansas Activities Association),” Walter said. “You have to specify a sport you are going to help with, and obviously I choose the vault, so I’ve gotten to be inside the ropes.”

“The coaches didn’t have any experience in the vault, because they never had the vault,” Walter said. “Somehow everything just came together. (Pea Ridge) coach Heather Wade is the senior high girls track coach and she has been gracious enough to let me inside the ropes.”

While Walter’s vaulting exploits are legendary in the track and field circles, Cassidy was unaware of her father’s accomplishments.

If Cassidy didn’t know of her father’s exploits, how did she get started in the sport?

“A girl I knew in the was doing it when I was in seventh grade, so I tried it,” Cassidy said. “So I came home, told him I wanted to try it and he just came and helped us out.”

Cassidy’s also finished second in the 100 and 200, behind teammate Blakelee Winn in both races, to help her team accomplish something her father’s never did, win a state title.

“It means so much,” Cassidy said. “I think it’s so cool to follow in his footsteps and to have him here with me.”